The temporal spreading of a pulse in an optical waveguide. May be caused by modal or chromatic effects.

Any phenomenon in which the velocity of propagation of an Electromagnetic Wave is Wavelength dependent. Note 1: In communication technology, “dispersion” is used to describe any process by which an electromagnetic signal propagating in a physical medium is degraded because the various wave components (i.e., frequencies) of the signal have different propagation velocities within the physical medium. Note 2: In an optical fiber, there are several significant dispersion effects, such as material dispersion, profile dispersion, and Waveguide dispersion, that degrade the signal. Note 3: In optical Fiber communications, the incorrect terms “multimode dispersion” and “intermodal dispersion” should not be used as synonyms for the correct term “multimode distortion.” Note 4: In classical optics, “dispersion” is used to denote the Wavelength Dependence of Refractive Index in matter, (dn/d , where N is the Refractive Index and is the wavelength) caused by interaction between the matter and light. “Dispersion,” as used in fiber optic communications, should not be confused with “dispersion” as used by optical Lens designers. Note 5: Three types of dispersion, relating to optical fibers, are material dispersion, profile dispersion, and waveguide dispersion.

Diserpsion is the temporal spreading of a pulse in an Optical Waveguide (an optical fiber, for instance). Dispersion is what causes a wave to separate into spectral components with different wavelengths.

There are three types of dispersion: chromatic, modal or waveguide. 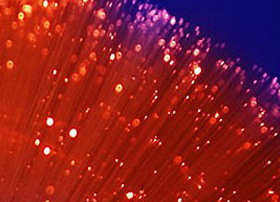